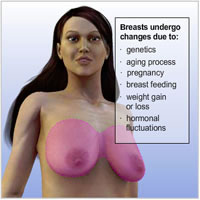 A woman’s breasts help define her femininity, and with the vast differences in shape, size, and appearance, breasts further help to define her individualism. Therefore, changes to the breasts can be dissatisfying and make women feel as if they are losing some of their femininity and youthful vitality. Like other areas of the body, the breasts undergo changes in response to factors such as genetics, the aging process, pregnancy and breast feeding, weight gain or loss, and hormonal fluctuations. Breasts that were once firm and shapely often begin to sag and droop giving them a loose or heavy appearance. A breast lift, or mastopexy, can help restore a firmer, shapelier breast, which will improve body contours and give the breasts a perky, youthful appearance.

Before you learn how a breast lift can help to correct sagging breasts, it is important that you understand the underlying anatomy. The breasts are composed of different types of tissue known as glandular, fatty, and fibrous tissue, which lie over the pectoralis muscle along the chest wall. The glandular tissues are composed of lobules and milk ducts. During lactation, lobules and milk ducts are responsible for producing and transporting milk to the nipple, respectively. The glands within the breast are surrounded by a layer of fatty tissue that gives the breast its shape and soft form. Suspensory ligaments, which are made of fibrous, or connective tissue, are intertwined amongst the breast glands and milk ducts. These suspensory ligaments attach the breast to the chest wall and allow it to remain suspended, but move freely with the body.

What Causes Breasts to Change Shape? 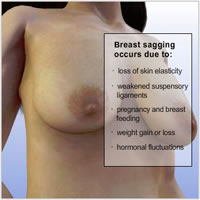 Although there are many factors that can contribute to sagging of the breasts, the aging process and the effects of gravity play a primary role in these changes. Just like facial skin, the skin around the breast loses its elasticity in response to a gradual breakdown of the skin’s support network, which causes it to become lax. In addition, the suspensory ligaments that attach the breast to the chest wall weaken and stretch in response to gravity. The breasts enlarge during pregnancy and breast feeding, which further causes the skin to stretch. As the breasts reduce in size following pregnancy, the skin that was once stretched, is now loose and sags. Lastly, fluctuations in your weight and even hormonal changes can cause your breasts to change in appearance. In combination, these factors can cause the breast to droop and sag, or in some cases rotate in a downward direction. 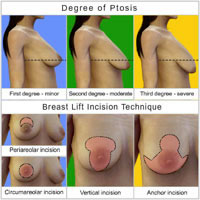 During a breast lift procedure, loose, excess skin is removed, and the remaining skin is tightened. As a result, the overall shape of the breasts is improved, and they are lifted to a new, more upright position. Your physician will assess the degree of ptosis, or sagging, of your breasts, to determine the procedure that is best for you. There are generally three degrees of ptosis classified as minor, moderate, and severe, which are determined by the position of the areola relative to the inframammary fold and the sternum. In general, minor ptosis exists if the areola lies at the inframammary fold. If the areola lies approximately one to two centimeters below the inframammary fold, the breasts have moderate ptosis, whereas the areola may lie two to three centimeters below the inframammary fold and rotate downward in cases of severe breast ptosis. There are four basic breast lift techniques known as the periareolar, circumareolar, vertical, and anchor technique, used to correct increasing ptosis, respectively. 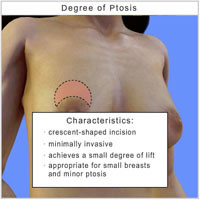 The periareolar, or crescent, technique involves a crescent, or halfmoon shaped incision made around the top of the areola. This technique is a minimally invasive procedure that achieves a small degree of lift. Therefore, it is appropriate for individuals with small breasts or minor breast ptosis.

The circumareolar, or doughnut, technique involves a circular incision made around the areola. This technique is a minimally invasive procedure that achieves a small degree of lift. Therefore, it is appropriate for individuals with small breasts or minor breast ptosis. 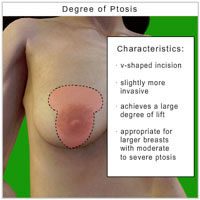 The vertical technique involves a v-shaped incision that extends around the top of the areola and down the midline of the breast. Although this procedure is slightly more invasive, it achieves a large degree of lift. Therefore, this type of incision is appropriate for individuals with larger breasts and moderate to severe breast ptosis. 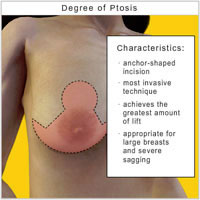 The anchor technique involves an anchor-shaped incision that extends around the top of the areola and laterally across the lower portion of the breast. Although this technique is the most invasive type of breast lift, it achieves the greatest amount of lift. Therefore, it is appropriate for individuals with large breasts and severe breast ptosis. This animation describes the anchor technique, which is one of the most common techniques performed today. 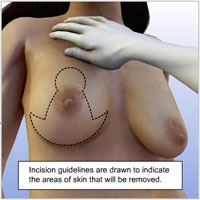 A breast lift procedure may last approximately one to four hours, depending on the complexity of the procedure and whether an additional procedure, such as breast augmentation, is performed at the same time. Prior to the start of your procedure, the treatment area will be cleansed and an anesthetic will be administered. Your physician will most likely administer general anesthesia in which you are asleep during the procedure. In addition, they will draw incision guidelines to indicate the areas of skin that will be removed during the procedure. 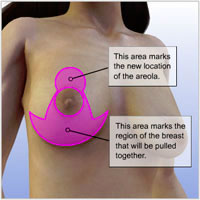 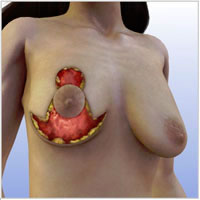 Using a variety of surgical instruments, the physician lifts the skin and separates it from the underlying tissues below. The areola and nipple are left intact, as the areas of surrounding skin are removed. In order to ensure that the breast has complete mobility, the physician may use a cautery device to undermine, or remove, tissue along the perimeter of the incision line. 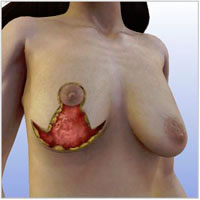 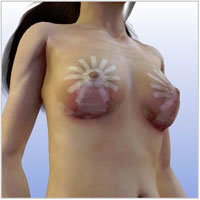 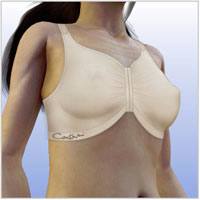 Your physician may recommend that you wear a type of compression garment following your procedure. This tight-fitting garment will help to reduce swelling by preventing fluid build up, as well as provide comfort and support as you heal. You will likely have to wear the compression garment for several weeks. If surgical drains are present, they along with any bandages will likely be removed within a few days, while any non-dissolvable stitches may stay in place for one to two weeks. You may experience some minor pain, bruising, and swelling, as well as numbness around the areola—all of which should subside in several weeks. Although you may feel well enough to return to work in approximately one week, you should continue to avoid strenuous activity such as exercise for three or four weeks after your procedure to allow your body sufficient time to heal. 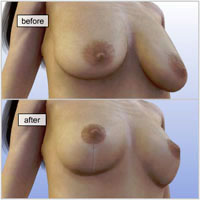 You will be able to notice a dramatic difference in the shape and position of your breasts immediately following your procedure. You may continue to notice a change in the appearance of your breasts as swelling subsides and they settle into their new positions. In fact, it may take up to one year before the final results from your procedure are apparent. Although you will have permanent scars following a breast lift, the scars will slowly fade to thin, white lines with time. It is important to realize that if you become pregnant after having a breast lift, the effects of pregnancy and breast feeding may compromise the results, and cause your breasts to sag and change shape. Although a breast lift cannot stop the aging process, it can help you not only improve the position of your breasts, but restore the fuller, shapelier appearance that you desire for years to come.

Ronald Moser M.D. is the surgical director for AesthetiCare Cosmetic Surgery Institute based in Southern California. He has been in practice for nearly 30 years and has performed more than 16,000 surgical procedures.